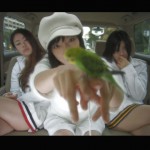 Be ready to spend most of the month in dark rooms as October is offering a bumper crop of excellent films. Top of the list is Sion Sono’s extraordinary love and guilt epic Love Exposure, which premiered at the Raindance Festival. Equally as good in a very different style, Johnny Mad Dog is a gut-wrenching portrayal of wild child soldiers in an unnamed African country â€“ we talk to director Jean-StÃ©phane Sauvaire. Elsewhere, the grande dame of the nouvelle vague AgnÃ¨s Varda tells us why she chose to revisit her life in cinema in her latest film, The Beaches of AgnÃ¨s, while Marc Price of the â€˜made-for-Â£45′ Colin reveals the secrets of low-budget zombie filmmaking. Park Chan-wook returns with stylish vampire love triangle Thirst, Shane Meadows offers the hilarious roadie mockumentary Le Donk & Scor-Zay-Zee, and newcomer Peter Strickland’s debut Katalin Varga, made in Romania, is an unusual take on the rape and revenge film.

Also out this month are compelling circular horror thriller Triangle, and smart zombie film Pontypool, which premiered at FrightFest in August. Mamoru Oshii’s animÃ© masterpiece Ghost in the Shell is released in a CGI-enhanced version â€“ this is the occasion for a discussion of the current trend of â€˜retrofitting’ old sci-fi films with modern CGI animation. In the DVD section, we applaud the release of Georges Franju’s striking debut feature La TÃªte contre les murs, and re-assess the social critique offered by British avant-garde film Herostratus.

We report back from the last Secret Cinema event and from the AND festival, which offered a variety of visual delights to the intellectually curious. And in our Short Cuts section we review the outstanding Siggraph Asia programme that screened at the London International Animation Festival in September.