As most of our readers must be well aware by now given the amount of media attention it is generating, it is 40 years since May 68 and to do our bit to mark that most tumultuous of years we have turned our attention to Czech cinema and the Prague Spring. We also have reviews of four key 1960s Czech films: Jan Nemec’s subversive satire of authoritarian rule The Party and the Guests, the formidably creepy nightmare that is The Cremator, the sumptuous and brutal epic Marketa Lazarova and Romeo, Juliet and Darkness, a melancholy love story under German occupation.

We have an interview with Xavier Mendik, organiser of the Cine-Excess festival, which explores cult cinema through a mix of academic conference and film screenings. We also preview the Fashion in Film Festival, which this year focuses on fashion and crime, and review sweet Taiwanese queer love story Spider Lilies, which showed at last month’s London Lesbian and Gay Film Festival.

In the Short Cuts section we look at some early works by FranÃƒÂ§ois Ozon, best known for features such as Swimming Pool and 8 femmes. Picking their favourite films in our Film Jukebox are The Mai 68s. We didn’t make this up, there really is a band called The Mai 68s. 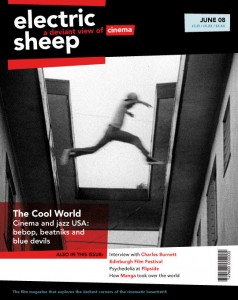 This bitter earth/Can it be so cold’, laments Dinah Washington on the soundtrack of Charles Burnett’s Killer of Sheep, a film defined as much by its stark monochrome images as by the heart-rending jazz tunes that breathe soul into them. A lost gem for thirty years, Killer of Sheep is re-released in the UK this month and to celebrate the belated recognition of one of American independent cinema’s greats, we look at the influence of jazz on film in the US with articles on Shirley Clarke, John Cassavetes, Jim Jarmusch and Beat cinema among others.

The magazine is no longer in print. Selected back copies are available for reference at Close-Up Video Library.