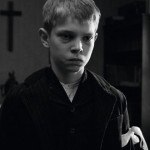 Also in UK cinemas in November are Henri-Georges Clouzot’s Inferno, a documentary investigating the gorgeous-looking crime thriller the French master could not complete, and low-fi indie romance Paper Heart, for which we have capsule reviews as part of our round-up of the 53rd London Film Festival â€“ read about unknown gems as well as films you can look forward to see on UK screens in the near future. We Live in Public, a documentary about internet pioneer Joshua Harris that also screened at the LFF, is out this month and we have an interview with director Ondi Timoner.

In the DVD section, we look at two very different French works, the acclaimed documentary on France under German occupation during the Second World War The Sorrow and the Pity, and extreme horror thriller Inside and its connection to the Paris riots of 2005. We also review a documentary on the All Tomorrow’s Parties music festival.

We have an interview with Momoko Ando, the young director of the wonderful Kakera â€“ A Piece of our Lives, conducted during the Raindance Film Festival last month. You can read the winning review in our Rollerball film writing competition, which we run every month in connection with the Electric Sheep Film Club at the Prince Charles. And our Film Jukebox this month features the very unusual Non-Commissioned Officers, who formed a band to promote a film â€“ or was it the other way around? 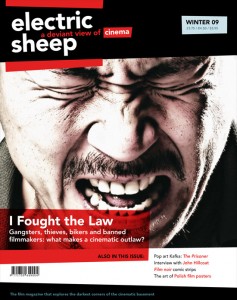 ‘I Fought the Law’ – The winter 09 issue of Electric Sheep looks at what makes a cinematic outlaw: read about the misdeeds of low-life gangsters, gentlemen thieves, deadly females, modern terrorists, cop killers and vigilantes, bikers and banned filmmakers.

Also in this issue: interview with John Hillcoat about his adaptation of Cormac McCarthy’s The Road, the art of Polish posters according to Andrzej Klimowski, Andrew Cartmel discusses The Prisoner and noir comic strips!