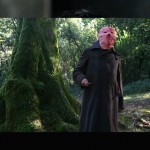 May is for Spanish brain-teasers with the theatrical release of Fermat’s Room, an inventive take on the locked room mystery, and the DVD release of ingenious time travel thriller Timecrimes. We have an interview with Timecrimes director Nacho Vigalondo who tells us about his love for genre cinema and playing god in his own film.

Also at the cinema this month are Azazel Jacobs’s touching low-key drama Momma’s Man, about a thirty-something man who regresses to childhood, delicate Hungarian tale of incestuous love Delta, and O’Horten, Bent Hamer’s understated meditation on old age and death.

In the DVD releases we have Pasolini’s â€˜trilogy of life’, which includes The Decameron, Arabian Nights and The Canterbury Tales, taut, intense French drama The Last of the Crazy People, and the first instalment of the live action manga adaptation 20th Century Boys. The controversial French horror film Martyrs is also released this month and we have an interview with director Pascal Laugier. And we review Alex Cox’s book X Films: True Confessions of a Radical Filmmaker.

Lovers of Asian cinema should keep May 21-24 free for the Terracotta Far East Film Festival, which promises many delights, including films by Johnnie To and Kim Ki-duk. And we have an interview with Ulrike Ottinger, femme terrible of German cinema, who we met last month at the London Lesbian and Gay Film Festival.