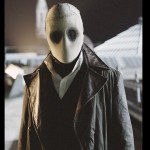 
Substitute is the theme of the summer 09 issue of Electric Sheep, with articles on the fraught relationship between Takeshi Kitano and ‘Beat’ Takeshi, the various cinematic incarnations of Patricia Highsmith’s Ripley, interchanging identities in Joseph Losey’s films, the dangers of false impersonation in Danish neo-noir Just Another Love Story, the paradoxes of black and white twins in offbeat lost classic Suture, not to mention cross-dressing criminals, androids and body snatchers. Also in this issue: interview with Marc Caro, profile of whiz-kid animator David OReilly, comic strip review of Hardware, and The Phantom Band’s favourite films! It is available from the specialist book store Cinéphilia, at selected retailers and cinemas or online from Wallflower Press.

As the ICA hosts a season of new British cinema, we take a closer look at some of the young directors who are steering clear of narrow social realism and genre clichés to carve their own individual filmmaking paths. We have reviews of gritty supernatural drama The Disappeared, imaginative quotidian crime drama The Blue Tower and an interview with Julian Richards, director of the intelligent hoodie horror thriller Summer Scars. We also revisit Gerald McMorrow’s stunningly ambitious debut Franklyn to mark its DVD release this month.

From the new to the established, if somewhat underappreciated, names of film history: we are very proud to present an interview with the legendary Kenneth Anger, whose films have been collected as the Magick Lantern Cycle in a superb BFI two-disc set. And we have an article on Joseph Losey, who is the focus of a major retrospective at the BFI Southbank throughout June and July.

Other cinema releases include slick French thriller Anything for Her while in the DVD releases we review the mondo-style documentaries Primitive London and London in the Raw, Věra Chytilová’s exhilarating Dada-inflected Daisies, Walerian Borowczyk’s exquisitely absurd Goto, l’ile d’amour, Dziga Vertov’s sound experiment Enthusiasm: Symphony of the Donbass and Italian exploitation movie Baba Yaga, based on Guido Crepax’s comic Valentina.

We report back on the Cannes festival and preview Club des Femmes‘ summer programme of swinging lesbian films. We also have an interview with Bulgarian director Javor Gardev, who was presenting his brilliant Eastern European noir Zift at the Istanbul Film Festival in April.

In the Short Cuts we talk to shorts producer Rob Speranza who was a guest at the Glimmer 09 Festival. And Scottish innovators The Phantom Band are in the Film Jukebox guiding us through their favourite films.