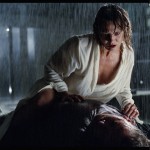 This month we look at disastrous Danish relationships with neo-noir Just Another Love Story and Lars von Trier’s latest, Antichrist. Two of our writers try to fathom von Trier’s extreme narrative of conjugal meltdown while in our interview with the director he explains some of the ideas behind the film.

Also out at the cinema in July is Duncan Jones’s Moon, a great new addition to British science fiction cinema. In the DVD releases, we take a look at Roger Corman’s Depression-era crime saga Bloody Mama and discover Jacques Tati’s little-known Parade.

We talk to Claire Denis about her new film 35 Shots of Rhum, report on this year’s Sydney Film Festival‘s focus on female directors and assess the state of gay cinema through an account of the London Lesbian and Gay Film Festival and a review of Boys on Film 2: In Too Deep.

We are also very proud to have an interview with Dario Argento, who was a guest at Cine-Excess last month. And in the Short Cuts section, we talk to artists Iain Forsyth and Jane Pollard about the films they made to accompany the re-release of the whole back catalogue of Nick Cave and the Bad Seeds.