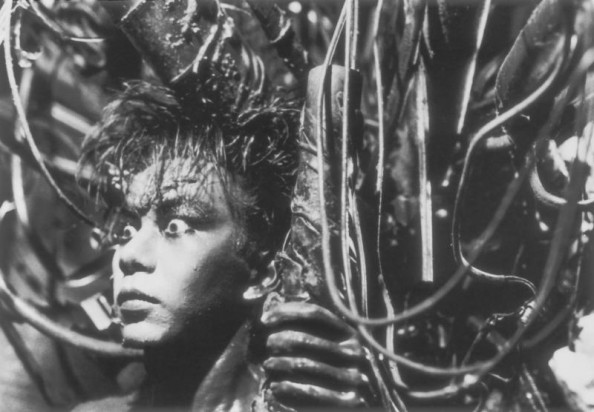 July is all about mutations as the East End Film Festival presents brand new restorations of Shin’ya Tsukamoto’s cyberpunk landmark Tetsuo: Iron Man and its sequel Tetsuo II: Body Hammer. We also a feature on Prometheus and panspermia and reviews of David Cronenberg’s tragic horror movie The Fly, John Fawcett’s Ginger Snaps, in which a misfit teenage girl’s struggles with puberty and fitting in are played out as werewolf transformation, and Peter Greenaway’s The Belly of an Architect, about an obsessed man dying of cancer. In Alter Ego, Tom Pollock is Jurassic Park‘s Dr Henry Wu and our Comic Strip Review is on Italian techno Western The Legend of Kaspar Hauser, starring Vincent Gallo.

In the blog, we report on the Edinburgh Film Festival, and we have an interview with Filipino director Khavn de la Cruz, whose outrageously fun freak show Mondomanila impressed us in Edinburgh. Abstract folk trio Dead Rat Orchestra select their favourite films in the Jukebox.

PODCASTS:
Scala Beyond: The unstoppable rise of fringe cinema: After the success of Scala Forever last year, a season of events programmed by film clubs and independent film exhibitors to pay homage to the legendary London cinema, and the Ken Russell Forever tribute in March, season producer Michael Pierce and director Phil Wood return with the even bigger Scala Beyond, which intends to widen the scope beyond nostalgic celebration. They talk to Virginie SÃ©lavy about the aims of the season, the unique filmic delights it will offer and the growth of alternative film screenings around the UK.