Comics and Film: In the first Film Show of the new year, Alex Fitch talks to Paul O’Connell about remixing images from The Matrix and other films to create satirical fumetti strips, while actress Jessica Martin discusses her comic book tributes to Hollywood starlets and the Golden age of Cinema. Also, in a Q and A recorded at SCI-FI-LONDON, Alex talks to Gene Ivery, the director of immortality drama Tourbillon.

This show was first broadcast on Wednesday 18 January 2017. 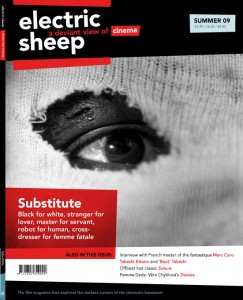 Substitute is the theme of the summer 09 issue of Electric Sheep, with articles on the fraught relationship between Takeshi Kitano and ‘Beat’ Takeshi, the various cinematic incarnations of Patricia Highsmith’s Ripley, interchanging identities in Joseph Losey’s films, the dangers of false impersonation in Danish neo-noir Just Another Love Story, the paradoxes of black and white twins in offbeat lost classic Suture, not to mention cross-dressing criminals, androids and body snatchers.


I’M READY FOR MY CLOSE-UP
For one night only (unless we inveigle them into doing more), the team of Resonance’s long missed Sunday night show Midnight Sex Talk are reunited on air for a special episode of I’m Ready for My Close-Up…
Alex Fitch talks to Tania Glyde and Kim Morgan about the films of experimental filmmaker Jeff Keen, whose work is about to be showcased in four programmes at the BFI Southbank over the next couple of weeks and in a definitive DVD box-set. Keen’s work ranges from comic book-inspired free-for-alls featuring cameos by The Flash, The Spirit and Mickey Mouse, to vaguely erotic scenes of debauchery in squats, and apocalyptic visions in ancient quarries.

Listen to the podcast of the discussion of Jeff Keen’s work + Alex Fitch talks to Wajid Yaseen, the artistic director of Ear Cinema, about their touring project Late Noon Sun, which uses silent movie tropes and iconography in a haunting theatrical installation about murder and magic that combines projection and performance in an immersive 360-degree experience.

Late Noon Sun is next on at The Colchester Arts Centre on 18 February 2009. For future performances visit the Ear Cinema website for more info.

For more info, please visit the home of this podcast at www.archive.org

In our autumn issue we look at cruel games, from the politics of human blood sport in the Corman-produced ultra-violent Death Race, to sadistic power play in the disturbingly funny Korean thriller A Bloody Aria, fascist games in German hit The Wave and Stanley Kubrick’s career-long fascination with game-playing. Plus: interview with comic book master Charles Burns about the stunning animated film Fear(s) of the Dark, preview of the Raindance Festival, reviews of Tarsem’s The Fall and Wong Kar Wai’s Ashes of Time Redux. And don’t miss our fantastic London Film Festival comic strip, which surely is alone worth the price of the issue!