In the 1960s-70s, the relaxation of censorship, together with women’s greater social assertiveness, led to the appearance of a substantial number of art and/or exploitative films that explored male/female relationships through sexual power games. A large sub-section, including Mario Bava’s The Whip and the Body (1963), Luis Buñuel’s Belle de jour (1967), Sergio Martino’s The Strange Vice of Mrs Wardh (1971) and Vicente Aranda’s The Blood Spattered Bride delve into what are presented as women’s secret repressed desires and internal conflicts. Aside from his numerous Sade adaptations, Jess Franco also dreamily explored female characters who are both victims and tormentors in Venus in Furs (1969) and Succubus (1968). Henri-Georges Clouzot’s Woman in Chains (1968) and Alain Robbe-Grillet’s Eden and After (1970) create hyper-aesthetic worlds of kinky abstract obsession while in Kôji Wakamatsu’s The Embryo Hunts in Secret (1966) and Pete Walker’s House of Whipcord (1974), the violence of amorous relationships takes on social and political connotations. Artist Niki de Saint Phalle made two unusual and fascinating contributions to this theme: not only did she co-direct her own semi-autobiographic perverse family fantasy, Daddy with Peter Whitehead (1973), but her art also appears in the fascinating Femina Ridens (Piero Schivazappa, 1968), which toys with expectations about dominant and submissive roles. The lecture will examine all these and more ramifications of the period’s unfettered sado-masochistic fantasies.

About the instructor:
Virginie Sélavy is the founder and editor of Electric Sheep, the online magazine for transgressive cinema. She has edited the collection of essays The End: An Electric Sheep Anthology, and has contributed to World Directory Cinema: Eastern Europe and written about Victorian London in Film Locations: Cities of the Imagination – London. Her work has appeared in various publications, including Sight&Sound, Rolling Stone France, Cineaste and Frieze.

About the Miskatonic Institute:
Named for the fictional university in H.P. Lovecraft’s literary mythos, The Miskatonic Institute of Horror Studies is a non-profit, community-based organization that started in Canada, founded by Kier-La Janisse in March of 2010. The school currently has branches in Montreal and London, with Miskatonic London operating under the co-direction of Kier-La Janisse and Electric Sheep Founder/Editor Virginie Sélavy.

All classes take place at the historic Horse Hospital, the heart of the city’s underground culture. Individual class tickets are £10 advance / £11 on the door / £8 concessions and will be available 30 days in advance of each class.

The next course dates are 9 April, 14 May, 11 June. For the full details of the courses please check the Miskatonic website. For all enquiries, please email Miskatonic.london@gmail.com.

Two great reviews of The End: An Electric Sheep Anthology have been published this month:

In the US magazine Cineaste, Mikita Brottman says: “What these essays all share is a certain sensibility – an informed, intelligent, playful, and slightly offbeat tone that is characteristic of Electric Sheep’s articles, reviews, podcasts and blog. This appealing, 250-page volume is beautifully designed. The essays are illustrated not only with stills from various films, but also with fabulous black-and-white illustrations.”

On the Critics’ Circle website, Laurence Boyce writes: “It’s this eclectic nature of both writing styles and design (the book is excellently laid out with some nicely illustrated pieces and a lovely end essay/poem dedicated to Bill Morrison’s Decasia) that make it such a fun and worthwhile [read]. Passionate yet informed about cinema, it makes one hope that The End does not live up to its name and that another volume is one the way.”

From the gutter to the avant-garde, The End: An Electric Sheep Anthology brings together a mind-bendingly eclectic programme of films, authors, artists and directors, including Bill Morrison’s chemical ghosts, the bad girls of 50s exploitation films, apocalyptic evangelical cinema, the human centipede, Spanish zombies, Japanese nihilists, Henri-Georges Clouzot’s lost masterpiece Inferno and Ingmar Bergman’s visions of the end. A must-read for all film lovers and those who like to wander off the beaten cultural track!

To buy the book, go to the Strange Attractor website.

Take a look at some sample pages: 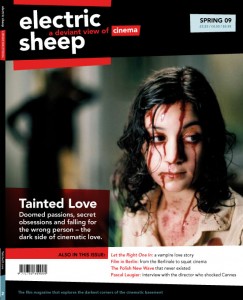 The spring issue of Electric Sheep focuses on Tainted Love to celebrate the release of the sweet and bloody pre-teen vampire romance Let the Right One In, with articles on incestuous cinematic siblings, Franí§ois Ozon’s tales of tortuous relationships, destructive passion in Nic Roeg’s Bad Timing, Julio Medem’s ambiguous lovers and nihilistic tenderness from Kôji Wakamatsu.

Also in this issue: interview with Pascal Laugier, film in Berlin from squat cinema to the Berlinale, the Polish New Wave, screen vamps, comic strip on the Watchmen film adaptation, and Ipso Facto’s top films.