Looking East / Thelma Goldman: In this month’s show,Virginie Sélavy talks to East End Film Festival programmer Andrew Simpson and Masonic Temple programmer Josh Saco, while programmer and presenter Evrim Ersoy discusses the next edition of DukeFest. Alex Fitch talks to Richard Hallam and Sylvie Venet-Tupy, authors of Thalma, An Artist’s Life, about Israeli-born British artist and animator Thalma Goldman. Plus an extract from a conversation between Austrian filmmaker Peter Tscherkassky and British director Peter Strickland (Berberian Sound Studio, The Duke of Burgundy) recorded at the ICA as part of their Artists’ Film Club programme on 11 June 2016.

The Electric Sheep Film Show is broadcast every third Wednesday of the month, 8-9pm at Resonance FM 104.4. Next date: Wednesday 20 July 2016.

This show was first broadcast on Wednesday 15 June 2016.

Running from 1 to 12 July, this year’s edition of the East End Film Festival presents an eclectic mix of new films from global and local independent filmmakers as well as industry masterclasses, free pop-up cinema screenings and music-focused events. With a special focus on showcasing home-grown talent , it’s also a great place for late and new discoveries of all kinds and one of the most exciting events this year is the screening of Hélène Cattet and Bruno Forzani’s neo-giallo The Strange Colour of Your Body’s Tears, now presented with a brand new original score by Edinburgh-based musician Ben Power (Blanck Mass, Fuck Buttons). The result is a fascinating score that enthralls, seduces and terrifies in equal measure and that is also available on double vinyl, released by Death Waltz Originals, presented in a 425gsm reverse board gatefold sleeve pressed on an exclusive screening event colour ltd to 500 units.

We are also delighted to be taking part again in a special day of screenings in the opulent and ornate surroundings of the Masonic Lodge Temple on Saturday 4 July, the perfect venue for a krimi classic such as The Dead Eyes of London, which screens at 1pm, followed by a special talk on krimi cinema hosted by Electric Sheep’s Alex Fitch, who will be joined by author and critic Kim Newman, and author Jim Harper. The afternoon screenings are then followed by a masquerade ball, in homage to George Franju’s 1963 production of Judex.

Among other highlights we are looking forward to an afternoon of radical film from contemporary Greece at the Whitechapel Galley, Marielle Heller’s celebrated Sundance hit Diary of a Teenage Girl and a special gala screening of Volker Schaner’s enlightening docu-portrait Lee ‘Scratch’ Perry’s Vision of Paradise, with the reggae and dub legend himself in attendance.

For more information about the programme and how to book tickets please visit the EEFF website.

Electric Sheep is very pleased to be partnering again with the East End Film Festival this year for a screening of The Dead Eyes of London at the amazing Masonic Temple, Andaz Hotel Liverpool Street, London, on Saturday 4 July, as part of the ‘From Murder to Mind Control’ weekend at the East End Film Festival. The film will be followed by a panel discussion hosted by Electric Sheep assistant editor Alex Fitch with celebrated film critic and author Kim Newman, author of Nightmare Movies, and Jim Harper, author of Flowers from Hell, who is currently working on a book on krimis.

The Dead Eyes of London, directed by Alfred Vohrer in 1961, is one of the best examples of the krimi (Kriminalfilm) genre, which flourished in West Germany from the mid-50s to the late 70s. Based on the work of English mystery writer Edgar Wallace like many of these crime thrillers, The Dead Eyes of London revolves around a series of murders committed by blind criminals who lure their victims into London’s dark back streets. And in the shadowy city engulfed in permanent fog hides a monster. Strange and atmospheric, it is a great introduction to a fascinating genre that remains relatively little known and unexplored, and the Masonic Temple the perfect venue to enjoy it!

Listen to Kim Newman talk to Alex Fitch about The Edgar Wallace Mysteries.

Following the screening there will be a short graduation ceremony in which Kim Newman will hand out their diplomas to the alumni of The Miskatonic Institute of Horror Studies – London.

Next up at the Masonic Temple will be Cigarette Burns’ screening of Sergio Martino’s seductive giallo The Case of the Scorpion’s Tail on 16mm. More details of the ‘From Murder to Mind Control’ weekend on the East End Film Festival website.

Electric Sheep is proud to present an afternoon of orphans and dark magic with a screening of Alucarda at the amazing Masonic Temple, Andaz Hotel Liverpool Street, London, on Saturday 14 June, as part of the Magic and the Macabre weekend at the East End Film Festival. Acclaimed writer and festival programmer Kier-La Janisse, author of House of Psychotic Women: An Autobiographical Topography of Female Neurosis in Horror and Exploitation Films (FAB Press), will introduce the screening.

Loosely based on Sheridan Le Fanu’s ‘Carmilla’, extravagant, sumptuous, macabre Alucarda hails from the golden age of Mexican horror. Raven-haired orphan Alucarda has been brought up in a convent to shield her from the evil influence of her diabolical father. But the devil in her blood cannot be suppressed and she draws the newly arrived Justine into her world. Thereon ensue copious amounts of nudity, wild-eyed hysteria, repressed desires, hints of lesbian love, religious exaltation, levitation, exorcism, self-flagellating nuns and unholy rituals, most of it set in a womb-like convent with nuns dressed in what looks like bloodied bandages. Part of the Panique movement co-founded by Alejandro Jodorowsky, director Juan López Moctezuma shared his interest in creating a magical and ritualistic kind of spectacle that would shake up audiences’ perceptions. He certainly succeeded with this astounding, surreal, eye-popping stunner. 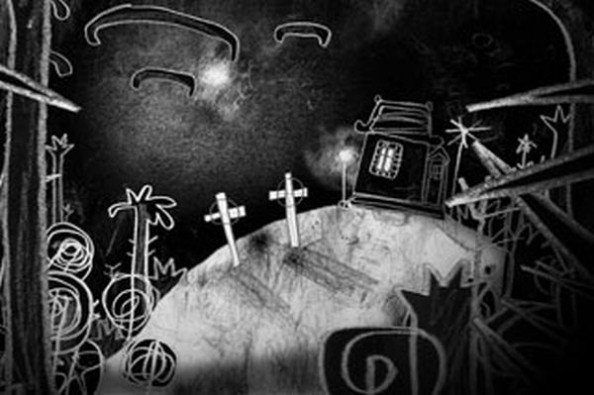 A dark animated fairy tale in black and white, about an orphan girl kidnapped by a witch who wants her tears for a magic potion.

Co-curated by Strange Attractor Press, this special weekend of EEFF screenings at the Andaz Hotel Liverpool Street’s Masonic Temple includes witches, ghosts and devilish mermaids, taking you from Wicca to haunted Mexican convents, and from British classics to a special evening with Dave McKean. Full schedule below.

Featuring Alex & Maxine Sanders, the spirit of the late 1960s magical revival is captured in this exploration of the currents of English witchcraft.

Alucarda has been brought up in a convent to shield her from her father’s evil influence, but the devil in her cannot be suppressed.

An orphan girl is kidnapped by a witch in this dark animated fairy tale.

Part of Anger’s Magick Lantern series with a soundtrack by a Moog-wielding Mick Jagger.

Oil company employees, led by Ron Perlman, are building an ice road in the remote Arctic. When a member of their team is found dead, fears arise that nature may be striking back.

Vineyard owner (David Niven) returns to his castle, where he and wife (Deborah Kerr) are confronted by a witch, calling for a blood sacrifice.

A psychology professor discovers that his wife has been practicing witchcraft and presses her to stop. Then things begin to go horribly, supernaturally wrong.

16:00 Audrey Rose
Robert Wise | 1977 | USA | 113 mins – 16mm Screening
A young Anthony Hopkins is unnervingly obsessed with the idea that Ivy Templeton is the reincarnation of his daughter.

Illustrator and designer Dave McKean has created books and graphic novels of The Graveyard Book (Neil Gaiman) and The Homecomeing (Ray Bradbury), worked with Richard Dawkins and Stephen King, designed characters for Harry Potter, and exhibited across the world. Join us for an evening with a truly unique artist, where Dave will discuss his work, and offer an exclusive first look at footage from his upcoming feature Luna. His other work can be seen on www.keanoshow.com

A collaboration with Neil Gaiman, Mirrormask is a dizzying journey into a complex fantasy world. 15-year-old circus worker Helena finds herself in a landscape filled with giants, monkeybirds and dangerous sphinxes. The mysterious Mirrormask is her only hope of escape.

A card game between God and the Devil, inspired by jazz guitarist Django Reinhardt.

Bruised from a failed marriage, a man wanders around Venice finding old books, memories, and a momentary ghost.


Evil Knights Templar rising from their graves, riding skeletal horses in pursuit of tourists gone astray, ruined monasteries and deserted villages: Amando de Ossorio’s creepy, atmospheric Tombs of the Blind Dead has some of the most memorable imagery of the Spanish horror boom of the 1970s. Influenced by George A. Romero’s Night of the Living Dead, de Ossorio nevertheless makes the returning dead his own: having had their eyes pecked out by crows after being hanged for their wicked ways, the Knights rely on sounds to hunt their preys. Released in the final years of Franco’s dictatorship, Tombs of the Blind Dead is not only a terrific eerie chiller, but also a subversive allegory for corrupt military and religious power oppressing and persecuting ordinary people. Tombs of the Blind Dead was followed by another three films on the blood-sucking Knights, all directed by the prolific de Ossorio.

Electric Sheep and Strange Attractor are proud to present a rare screening of Tombs of the Bind Dead at the Masonic Temple, Andaz Hotel Liverpool Street, London, on Saturday 29 June, as part of the East End Film Festival. Jim Harper, author of ‘The New Regime: Spanish horror in the 1970s and the end of the dictatorship’, published in The End: An Electric Sheep Anthology (Strange Attractor Press), will introduce the screening.

The screening ends a whole day of cult classics around the theme of secret societies at the Masonic Temple starting from 2pm: Sherlock Holmes hunts Jack the Ripper in British classic Murder By Decree, introduced by critic and novelist Kim Newman; a woman begins seeing strange apparitions in 1970’s giallo The Perfume of the Lady in Black; Jodorowsky’s Mexican circus grotesque Santa Sangre is introduced by its composer Simon Boswell; and finally, we descend into the Tombs of the Blind Dead.

In May 2011, Electric Sheep took part in the East End Film Festival’s first celebration of Secret Societies at the Masonic Temple. Read our feature on the Freemasons and their connection to Jack the Ripper and listen to a podcast of our radio show on Jack the Ripper, the Freemasons in cinema and the links between crime and the occult with guests Strange Attractor Press publisher Mark Pilkington and Electric Sheep and Strange Attractor contributor Richard Bancroft. You can also listen to a podcast of a panel discussion on Jack the Ripper, witches’ covens and religious cults in film recorded at the Masonic Lodge. Speakers include Electric Sheep editor Virginie S&#233lavy, assistant editor Alex Fitch, Nollywood scholar Nicola Woodham, filmmaker and horror specialist Jennifer Eiss, and Jim Harper, author of Flowers From Hell: The Modern Japanese Horror Film. Includes clips from Murder by Decree, Season of the Witch, The Wicker Man and Rosemary’s Baby.