In an interview recorded at SCI-FI-LONDON, Virginie Sélavy talks to the makers of sci-fi drama True Love, about a young married couple who find themselves locked in separate sealed rooms and forced to answer questions about how much they trust each other. Writer-producer Fabio Guaglione and director Enrico Clerico Nasino discuss trust and betrayal, using genre to analyse a romantic relationship, and other ‘locked room’ films, including Vincenzo Natali’s Cube (1997).

First broadcast on Resonance FM 104.4 on Friday 18 May 2012. For more info and formats to stream/download, visit www.archive.org.

Plus, in a Q&A recorded at SCI-FI-LONDON in April 2010, Alex Fitch talks to Polish poster designer Andrzej Klimowski and SF writer/journalist Wojciech Orli&#324ski about cinematic adaptations of the work of Stanislaw Lem from Steven Soderbergh and Andrei Tarkovsky’s adaptations of Solaris to more offbeat films such as Edward Zebrowski’s The Hospital of Transfiguration.

To mark the Kosmos: A Soviet Space Odyssey season at BFI Southbank, Virginie S&#233lavy talks to Russian scholar Sergei Kapterev, from the Institute of Film Art in Moscow, about Soviet science fiction, including the first Russian SF film, Aelita Queen of Mars (1924), the connection between SF cinema and politics, the impact of the space race and the Cold War period, pioneering filmmaker Pavel Klushantsev, Andrei Tarkovsky’s Solaris (1972) and Stalker (1979), and Roger Corman’s re-edits of popular Soviet sci-fi films.

This programme coincides with our exploration of Andrei Tarkovsky’s work throughout July.

Pumzi is a Kenyan science fiction short film written and directed by Wanuri Kahiu, set in Africa in the future, 35 years after ‘The Water War’. As communities live in underground compounds, scientist Asha is led to investigage the possibility of growing seeds in the seemingly dead world outside. Pumzi was screened at the 2010 Sundance Film Festival and we hope to be able to see it soon in the UK, the trailer really looks amazing! For more information go to the Pumzi website.


Electric Sheep‘s assistant editor Alex Fitch is curating a comics festival as part of the 10th Sci-Fi London Festival in April. He is also the presenter of Panel Borders, the UK’s only weekly broadcast radio show about comics, Thursdays on Resonance 104.4 FM.

The two-day comics festival will celebrate modern British comic creators from the last 30 years. The event will take place at the Apollo Piccadilly Cinema and at BFI Southbank and welcomes guests who have been published for over three decades plus newcomers to the medium.

Sci-Fi London has ensured there are a number of female guests on the comic book panels and members of the small press and manga community are well represented to ensure members of the audience can get advice from creators and professionals working their way into the industry.

Comics at Sci-Fi London takes place at the BFI Southbank on the May Bank Holiday weekend (30 April – 1 May 2011). There will be an additional panel at the Apollo Piccadilly cinema on 23 April about ’25 years of John Constantine: Hellblazer’: Andy Diggle and David Lloyd discuss the character from his first regular appearance in Swamp Thing #37 to the 250th issue of his own title, published last year.

At the BFI, panel discussions will include ‘Poe, Lovecraft and comics’, ‘Manga Jiman’, ‘Comics and moving pictures’ and City of Abacus. Hannah Berry will be previewing her new book Adamtime, the long awaited follow-up to the acclaimed Britten and Br&#252lightly plus children’s workshops run by creators from Solipsistic Pop and a screening of 20 minutes of footage from the new film Warren Ellis: Captured Ghosts followed by a discussion of the writer’s work with some of his collaborators.

There will also be a handful of tables at the BFI for creators to sell and sign their work and Sci-Fi London will be inviting small press creators to take part in the festival for free.

Comics at Sci-Fi London is a Sci-Fi London Lab event, which encompasses talks with artists, writers, scientists, filmmakers and critics talking about science-fiction and science-fact.

In a Q&A recorded live at this year’s Sci-Fi London Oktoberfest, Alex Fitch talks to British director Gareth Edwards about his genre-crossing film Monsters, which features a photo-journalist escorting a spoilt rich girl across Mexico following an alien invasion. Gareth Edwards discusses his use of special effects and the pros and cons of shooting guerrilla-style with a small cast and crew South of the Border.

This interview was broadcast on 3 December 2010 on Resonance 104.4 FM as part of the visual arts show I’m Ready for my Close-Up.

To coincide with the release of the new sci-fi thriller Splice, in which scientists Adrien Brody and Sarah Polley create a dangerous half-human hybrid via genetic manipulation, Alex Fitch talks to director Vincenzo Natali about the film and the other three movies he’s collaborated on with actor David Hewlett – Cypher, Nothing, the cult classic Cube – and his forthcoming adaptation of William Gibson’s novel Neuromancer.

An edited version of this interview was broadcast 23/07/10 on Resonance 104.4 FM as an episode of I’m ready for my close-up.

On the Silver Globe is an esoteric Polish sci-fi epic directed by Andrzej Żuławski in 1977 – then lost and believed destroyed by the authorities for a decade before its cinema release. In 2009, the film was screened at Tate Modern as part of a mini-season of films titled ‘Polish New Wave – The History of a Phenomenon that Never Existed’. Looking ahead to the release of this film on DVD in the UK, Alex Fitch talks to Andrzej Żuławski about his struggles in getting the film released and the travails involved in making his horror films The Third Part of the Night (1971) and Possession (1981) under the eyes of a communist regime.

Alex Fitch also talks to Polish poster designer Andrzej Klimowski and his wife Danusia Schejbal (famously depicted as the victim of an assassin’s bullet on Klimowski’s poster for Robert Altman’s Nashville) about working on the fringes of Polish filmmaking in the late 1970s and whether the films of the time could be seen as belonging to an artistic movement.

Andrzej Żuławski will be the focus of a retrospective at this year’s Kinoteka festival which runs from 7-28 April 2016. 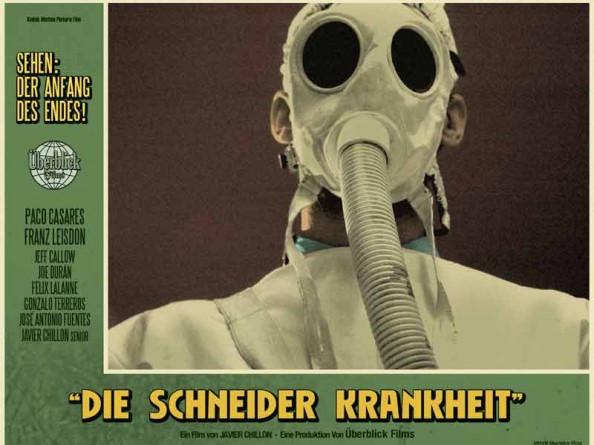