In a Q&A recorded live at this year’s Sci-Fi London Oktoberfest, Alex Fitch talks to British director Gareth Edwards about his genre-crossing film Monsters, which features a photo-journalist escorting a spoilt rich girl across Mexico following an alien invasion. Gareth Edwards discusses his use of special effects and the pros and cons of shooting guerrilla-style with a small cast and crew South of the Border.

This interview was broadcast on 3 December 2010 on Resonance 104.4 FM as part of the visual arts show I’m Ready for my Close-Up.

More for more information and a variety of formats you can stream / download, please visit the home of this podcast at www.archive.org. 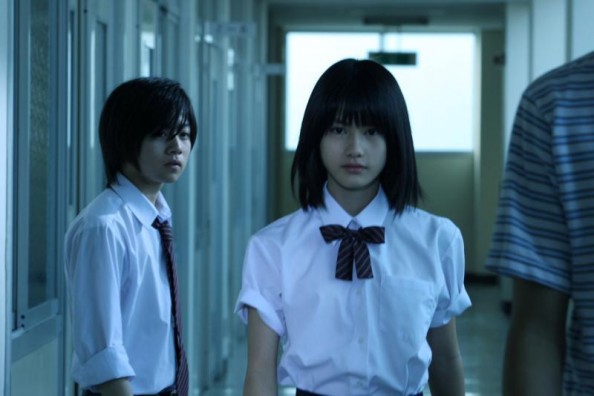 Confessions, the new film by Tetsuya Nakashima, will have its UK premiere at the FrightFest Halloween All-Nighter on Saturday 30 October at the Empire, London. After the bubblegum quirkiness of Kamikaze Girls and the candy-coloured melodrama of Memories of Matsuko, Nakashima returns with a superbly accomplished, original take on the revenge tale, adapted from the debut novel by Kanae Minato.

Yuko Moriguchi is a meek teacher who decides to quit her job after the death of her four-year-old daughter. But before she leaves, she lets her class know that she believes her daughter was killed by two of the students. Knowing that the law won’t help her, she constructs an intricate revenge against them. Masterfully scripted, suprising, convincing, chilling, provocative, Confessions is an impressive achievement.

Further information can be found on the FrightFest website and tickets can be booked on the Empire website. The film will also be part of Ireland’s Access Cinema Japanese Film Festival, which will tour Dublin, Cork and Galway from 29 October to 14 November 2010.

Confessions is released in UK cinemas by Third Window Films on 11 February 2011.

To coincide with the start of a month of horror film releases in the cinema and on DVD in the run up to Halloween, Alex Fitch interviews two veterans of horror cinema, Joe Dante and Tobe Hooper. Dante talks about his two latest projects, Splatter, starting on the Horror Channel (Sky / Virgin / Freesat) 24/09/10 and continuing over the next two Fridays, and his new 3D film currently in UK cinemas The Hole. Also, in an interview recorded at last month’s FrightFest horror festival in London, Alex Fitch talks to Tobe Hooper, following a retrospective screening of his first two films Eggshells and The Texas Chainsaw Massacre, which depict the end of the summer of love and the loss of America’s innocence in the 1970s.

Eggshells received its UK premiere at Frightfest and will be released on Blu-Ray / DVD towards the end of the year.

During Film4 FrightFest, Alex Fitch interviewed producer Eli Roth and director Daniel Stamm about the new ‘mockumentary’ horror film The Last Exorcism, which opens in UK cinemas today and tells a tale of possession, cattle mutilation and murder in a small rural community. Daniel Stamm talks about how using a documentary style to make supernatural movies helps break the fourth wall for the audience to help draw them into events, while Eli Roth talks about how his experience of producing his own movies Cabin Fever and Hostel differs from his more advisory role on this film.

This interview will be broadcast at 5pm on Friday 3 September at Resonance 104.4 FM (London). For more information about Film4 FrightFest, visit the FrightFest website. Read our review of The Last Exorcism.

ODDSAC is a feature film collaboration between the band Animal Collective and filmmaker Danny Perez. The film was co-conceived by and stars Animal Collective. ODDSAC is a dense and surreal layering of audio and visual elements that eschews conventional narrative to create a visceral, immersive experience. ODDSAC features an original score with new songs from the band and complex digital manipulation by Perez, a debut filmmaker and visual artist known for his concert projections with musicians such as Black Dice and Panda Bear. ODDSAC represents a new synthesis of music and film, a ‘visual album’ whose songs will not be released in any other form.

The DVD of ODDSAC will be released by Plexi in the UK on 9 August. The DVD package includes the 55-minute film with news songs and score by Animal Collective; a 40 page art book in a slipcover case; high definition transfer and 5.1 surround sound audio. For more information go to the ODDSAC webiste.

To coincide with the release of the new sci-fi thriller Splice, in which scientists Adrien Brody and Sarah Polley create a dangerous half-human hybrid via genetic manipulation, Alex Fitch talks to director Vincenzo Natali about the film and the other three movies he’s collaborated on with actor David Hewlett – Cypher, Nothing, the cult classic Cube – and his forthcoming adaptation of William Gibson’s novel Neuromancer.

An edited version of this interview was broadcast 23/07/10 on Resonance 104.4 FM as an episode of I’m ready for my close-up.

Zhang Yimou’s breakthrough martial arts epic is a lavish visual feast best appreciated on the largest screen possible! Set in the third century BC as the ambitious, war-mongering king of Qin is trying to unite China by force, it stars Jet Li as a nameless swordsman granted a rare audience with his sovereign after killing three fearsome assassins (played by some of Hong Kong cinema’s greatest, Donnie Yen, Tony Leung and Maggie Cheung). As the sly king questions the ‘hero’, we are presented with three different versions of the events, each colour-coded. The result is a sumptuous spectacle combining graceful fight scenes, magnificent d&#233cors, dubious truths and questionable politics.

FILM WRITING COMPETITION:
Film students and aspiring film writers are invited to enter our film writing competition: write a 200-word review of Hero and send it to ladyvengeance [at] electricsheepmagazine.com, marked ‘Film writing competition’ in the subject line. A film expert to be announced shortly will pick the best entry. Deadline: Thursday 26 August. The selected review will be published on the Electric Sheep website in September. Read the May winning review of Midnight Cowboy.

Watch the trailer for Werner Herzog’s latest madcap foray into genre film My Son, My Son, What Have Ye Done?:

Read about My Son, My Son, What Have Ye Done?.

Read our review of Splice.