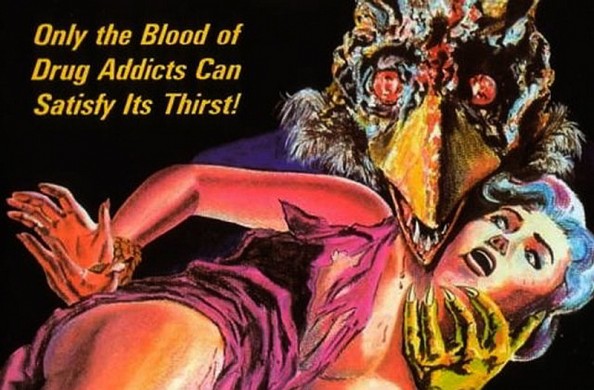 In his introduction to the important collection of film essays King of the Bs, Todd McCarthy quotes Andrew Sarris’s dictum ‘eventually we must speak of everything if there is enough time and space and printer’s ink’. Sarris was working up to an assessment of Edgar G. Ulmer’s Daughter of Dr Jekyll (1958).

In his new book Video Dungeon, Kim Newman has written about ten sub-categories of ‘everything’ – from found footage and Bigfoot movies through the weirder appearances of Frankenstein and Dracula and group-of-random-strangers-wake-up-in-a-trap pictures to Weird Hippie Shit and made-for-cable CGI mutant shark or snake attack cinema.

To launch the book, Kim will be talking about critiquing films some reckon beyond or beneath or outside criticism, illustrated with clips from the weirdest and rarest films. He will consider critical approaches to what Michael Weldon calls ‘Psychotronic Cinema’ and less perceptive souls write off as ‘junk’.

He’ll look at the Golden Turkey/Mystery Science Theatre brand of snark, the engaged approach of John Bloom writing as Joe Bob Briggs, fanzine legends like Bill Landis (Sleazoid Express), the cataloguing frenzy of Video Watchdog, academic and personal approaches from Carol Clover and Kier-La Janisse and curatorships like Cigarette Burns, the Final Girls and the Miskatonic Institute itself.

Kim Newman is a novelist, critic and broadcaster. His fiction includes The Night Mayor, Bad Dreams, Jago, the Anno Dracula novels and stories, The Quorum, The Original Dr Shade and Other Stories, Life’s Lottery, Back in the USSA (with Eugene Byrne), The Man From the Diogenes Club, Professor Moriarty: The Hound of the d’Urbervilles and An English Ghost Story under his own name and The Vampire Genevieve and Orgy of the Blood Parasites as Jack Yeovil. His non-fiction books include Nightmare Movies, Ghastly Beyond Belief (with Neil Gaiman), Horror: 100 Best Books (with Stephen Jones), Wild West Movies, The BFI Companion to Horror, Millennium Movies and BFI Classics studies of Cat People, Doctor Who and Quatermass and the Pit. He is a contributing editor to Sight & Sound and Empire magazines (writing Empire’s popular Video Dungeon column), has written and broadcast widely, and scripted radio and television documentaries. His stories ‘Week Woman’ and ‘Ubermensch’ have been adapted into an episode of the TV series The Hunger and an Australian short film; he has directed and written a tiny film Missing Girl; he co-wrote the West End play The Hallowe’en Sessions. Following his Radio 4 play ‘Cry Babies’, he wrote episodes for Radio 7’s series The Man in Black (‘Phish Phood’) and Glass Eye Pix’ Tales From Beyond the Pale (‘Sarah Minds the Dog’). He scripted (with Maura McHugh) the comic book miniseries Witchfinder: The Mysteries of Unland (Dark Horse), illustrated by Tyler Crook; it’s a spinoff from Mike Mignola’s Hellboy series. His official web-site is at www.johnnyalucard.com. His forthcoming fiction includes the novels The Secrets of Drearcliff Grange and Angels of Music. He is on Twitter as @AnnoDracula.

For full details of the next courses please check the Miskatonic website. For all enquiries, please email Miskatonic.london[at]gmail.com.